What is Age-Related Macular Degeneration (AMD)?

Among older adults in industrialized nations, age-related macular degeneration (AMD) is the primary cause of visual impairment and blindness.1 It affects the macula, an oval-shaped area near the center of the retina that is important for central vision or seeing straight ahead of us.

In AMD, sizeable yellow deposits called drusen may develop under the retina. While a few small drusen may be a normal byproduct of aging, larger drusen can be a sign of AMD. If the macula is damaged, it can cause a blurry or dark spot in the middle of your field of vision. The progression of AMD can vary, and treatment is different depending on the stage of disease.

There are three stages of AMD, and these are generally based on the size and number of drusen present. AMD might only be present in one eye or found in both, and the severity can vary in each eye. The three stages include2: 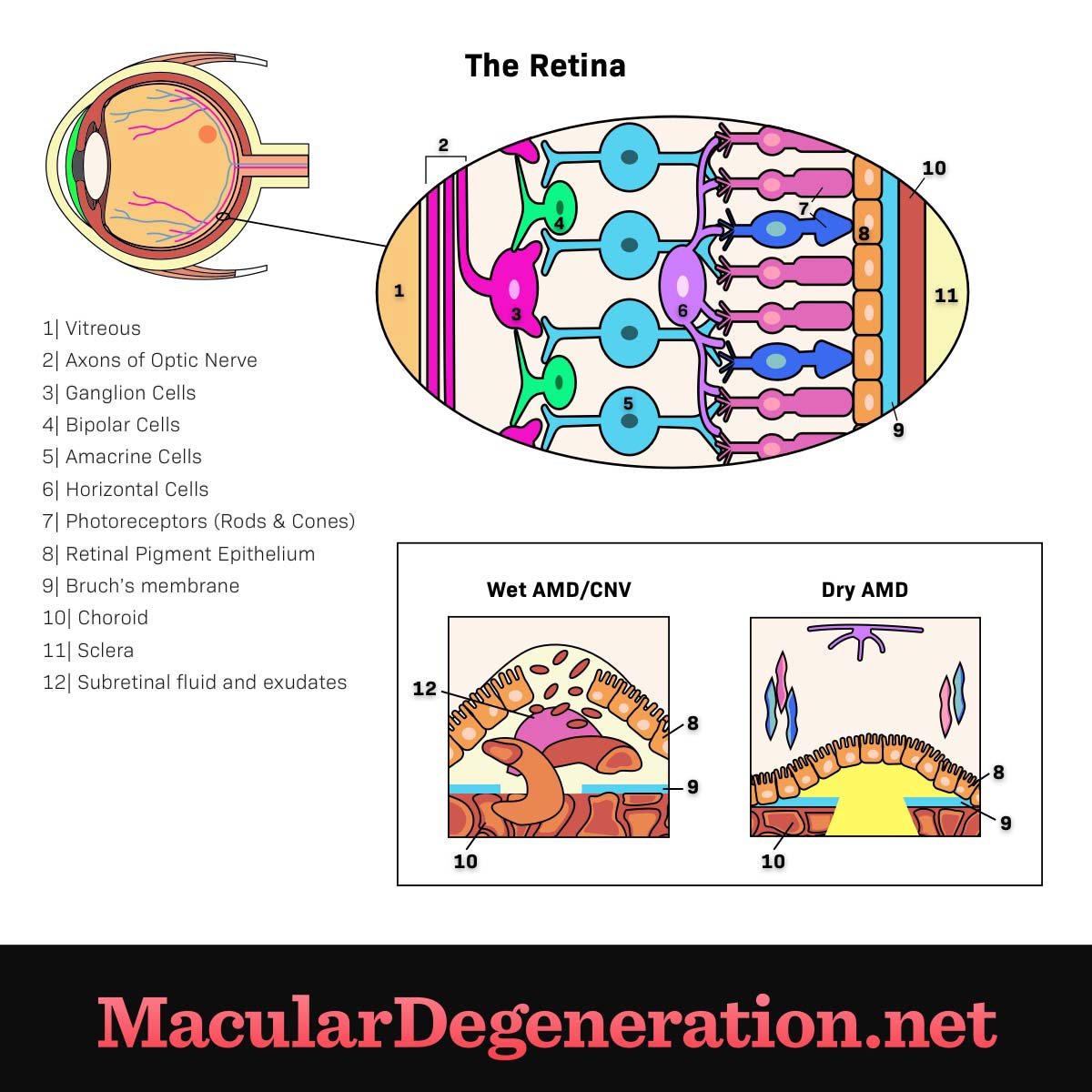 It is possible to have both types of AMD in the same eye. While approximately 90 percent of AMD patients have dry AMD, wet AMD is more often associated with central vision loss.1 Not everyone with early AMD will go on to develop intermediate or late AMD. Once early AMD is diagnosed, there are lifestyle changes and vitamin supplements that may help reduce the risk of AMD progression.

Age-related macular degeneration (AMD) is a disease of the macula, the center of the retina. It impacts central vision and is most prevalent in those over the age of 50.3 It appears that AMD arises from damage to the retinal pigment epithelium (RPE) and Bruch’s membrane (BM).3,4 When the RPE and BM start breaking down, waste products that would normally be recycled begin to accumulate underneath the retina, forming into drusen. Drusen are markers of dry AMD that may appear even in the early stages of the disease before any changes in your vision.

Another early sign of AMD that your doctor can find with a dilated eye exam are pigmentary changes under the retina. When the RPE cells break down, the pigment is released, causing clumps of pigment to form.5 This won’t change your eye color and won’t be noticeable to the general individual, but your eye doctor will be able to see the clumps underneath the retina, and may also be able to see areas that are lacking pigment.

In wet AMD, also called neovascular AMD, the growth of new, abnormal blood vessels under the retina occurs; hence the term “neovascular.”5 These blood vessels form because the eye is trying to get more oxygen and nutrients to an area damaged by dry AMD, similar to the healing response seen after a scrape or cut. These blood vessels usually arise from the choroid and break through weak areas in Bruch’s membrane to enter the retina. However, the walls of these new abnormal blood vessels tend to be weaker and prone to leaking or bleeding, which may result in rapid damage to the macula with associated vision loss. Whereas dry AMD typically has a slower progression, vision loss from wet AMD can be very sudden.

Because AMD is asymptomatic, or causes no symptoms, in the early stages, it’s important to have regular eye exams by a professional – especially if you’re over the age of 50.6 An eye doctor can perform tests like a visual acuity test, dilated eye exam, or an Amsler grid. More invasive tests are sometimes done but are generally not the first-line in diagnosis.

The main risk factor for AMD is age. Patients with AMD are usually age 50 or older, with the prevalence of AMD increasing with age.1,6 Advanced AMD is seen more often in Caucasian patients than in African-American or Latino/a patients.

There are some lifestyle factors that can impact your risk of developing AMD, including:

AMD is treatable, but an important factor is an early diagnosis. Prompt treatment can help you maintain vision and address any vision loss you might already have. Although there is no treatment yet for early AMD, being aware of any changes is key, and adopting healthy lifestyle habits might have positive effects on the course of your AMD.

What Is the Treat and Extend Method for Wet AMD?

What is Macular Edema?