Hooray! I’m Stable, or at Least My Eye Is 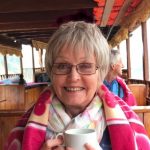 Yippee, whoo hoo, congratulations to me! No bleed! For those of you who’ve read my previous story, We Begin Again, you’ll remember that after a few months of stability, my wet eye had started to leak again. Just a minor bleed, but still, a bleed. So then on to a new series of three injections at five-week intervals.

I was a little concerned when the original appointment schedule was just the three injections at five-week intervals, then nothing for a stretch of eight weeks. But they must know what they’re doing, as it seems to have worked out. I know they would have called me in sooner if anything had shown up at the last visit.

Yesterday, after the eight week period with no injections, my OCT pictures showed no bleeding! Perhaps I’ll be one of the lucky ones who can extend it out to a twelve-week schedule. I can handle four injections a year, even if for the rest of my life. The doctor then suggested it was my decision whether to have the next injection at eight weeks or start extending it further and see him at nine weeks. We decided together on eight weeks, followed probably by nine the next time if it was still stable. He does the “treat and extend” protocol.

Treat and extend has, from what I understand, become the standard treatment for neovascular AMD. Studies have shown this seems to be the regimen that is most easily followed and yet still gives the desired outcome.  This link has some good information on it.

The only little fly in the ointment was my visual acuity test. BCVA (best corrected visual acuity) in my wet left eye showed almost one line less, but my doctor could find no reason for it, no anatomical change showing up in the pictures, and I hadn’t actually seen any change. We did discuss how on some days my sight was better than others, which apparently is quite normal. That’s a good thing to have confirmed, as many of you in our MacularDegeneration.net community have commented on it.

One reason for the small decline might be because I’m in the middle of an allergy attack, which includes itchy, watery eyes, and I hadn’t used my antihistamine eyedrops. I had forgotten to call and ask if it was safe to use before an injection, so decided not to. Which of course was the right decision. He said it would be okay to start them again today, thank goodness. Hopefully this early fall pollen season will end soon!

My dry right eye was basically the same as last time, just a few letters less, and similarly no change in the OCT pictures. Thankfully, it’s still dry. When I said I knew it would advance to wet at some time; that having large soft drusen and one eye already wet made it more likely, he said that in his experience it was really no more than a fifty/fifty chance. Fifty/fifty is an acceptable number, but then again, it’s not my decision, is it? And I’m still smiling from yesterday.