Braille is, very simply, a written language code that is felt rather than seen. Braille consists of a series of one through six raised dots, each of which represents a letter in the alphabet.1 Braille is read by a sight-impaired person running their fingers over the dots from left to right across the page, and is usually felt by the index fingertips. These raised symobls represent punctuation, numbers, and letter groupings, just like written word.2 There are Braille alphabets for almost all written languages, including English, Arabic, and Chinese.2

How does Braille work?

Each Braille letter is made up of a combination of six raised dots, in a grid of two wide and three high. You can see an example of the alphabet and numbers here. Each combination of dots represents a letter, number or punctuation mark.2 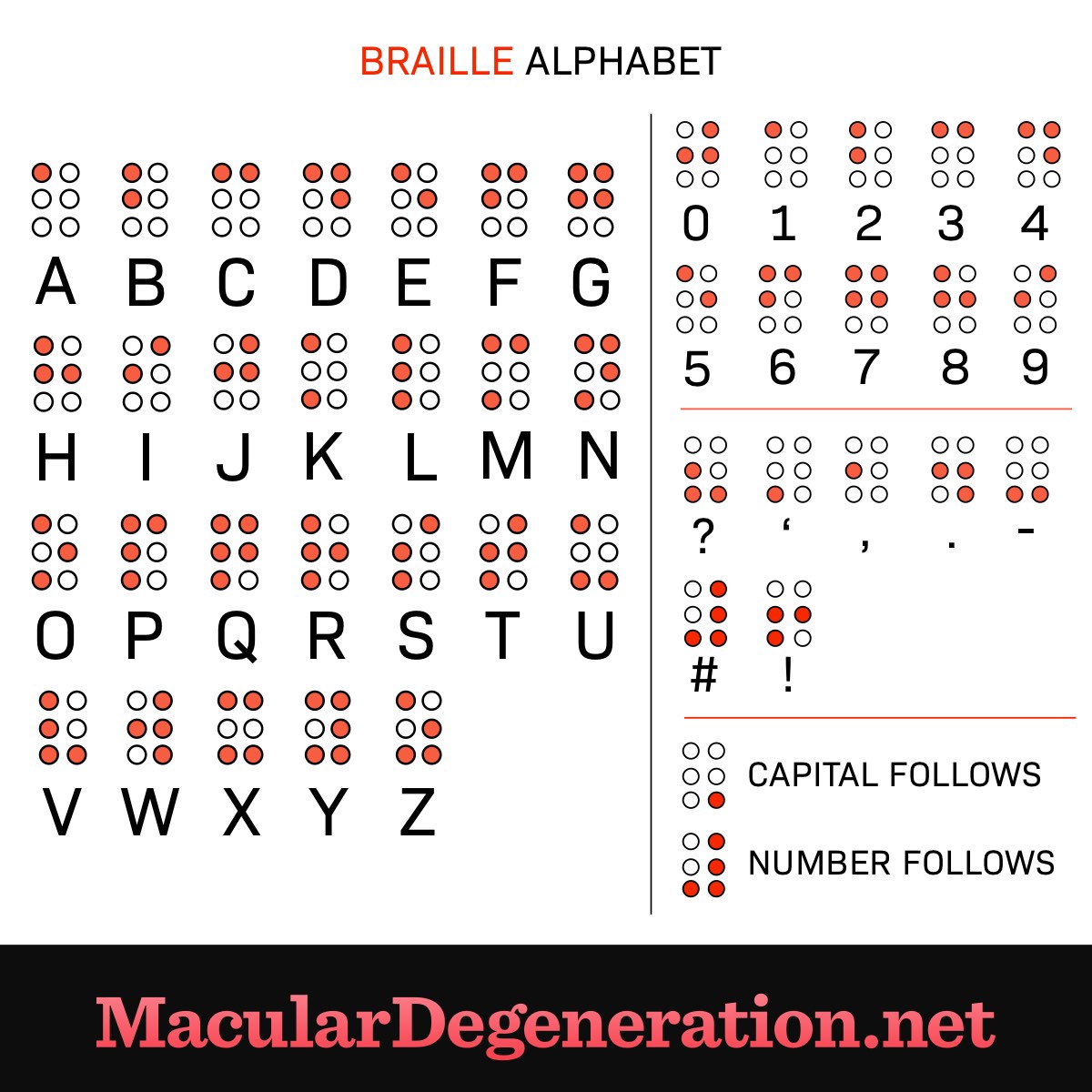 Originally every word was spelled out letter-by-letter. This form of writing is known as “uncontracted Braille”. Unfortunately, Braille books are rather large, bulky, and expensive, so there have been some changes to the original Braille writing, including the use of contractions.3 This contracted Braille makes reading quicker and books less bulky. Contracted Braille is commonly taught from a young age, but some newly blind adults prefer uncontracted Braille when they first learn to read the language code.2

How was Braille invented?

A boy named Louis Braille invented the written code that would bear his name in the early 1800s. Louis was blinded in an accident at a very young age and became a student at the National Institue for Blind Youth in Paris.3 At the time he was attending school, blind and vision-impaired people read books that had raised letters, but these were hard to print and even more difficult to read.3

At school, Louis was introduced to a military code that was used to help soldiers read in the dark.2,3 This code was similar to what is now Braille, but it used 12 dots instead of 6, and as such, not all the dots could be felt in a single touch.3 Louis reduced the code to the six-dot system that is used today. By reducing the size of each letter, it was much simpler to read, allowing each letter to be felt with a single touch of a fingertip.3 Impressively, Louis was only 15 years old when he invented his Braille system!2

How has Braille changed since it was invented?

The Braille system that is used today is very similar to the one that Louis Braille invented almost 200 years ago.3 There have been some changes through the years, including the systems of contractions that help to cut down on the bulkiness of Braille books. There has been a movement within the blind community to standardize Braille contractions and codes, in order to keep it simple and easy to understand.3

Braille has also moved into the technological age, with computerized systems and portable electronic devices making writing and reading Braille more accessible.2 Braille can be written manually, with a stylus and a piece of paper, or typed out with either a Braille typewriter or a computer-driven Braille embosser.2 Beyond books and other common written materials, there are Braille labeling kits, decks of cards, and even Scrabble games, making more items friendly for those with sight loss or vision impairment.3

What Is Geographic Atrophy?

What is the Mediterranean Diet?

0 comments
This article represents the opinions, thoughts, and experiences of the author; none of this content has been paid for by any advertiser. The MacularDegeneration.net team does not recommend or endorse any products or treatments discussed herein. Learn more about how we maintain editorial integrity here.

Is diet a big part of your MD journey?