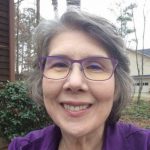 In a previous article, I wrote about OrCam Smart Glasses, one of a type of head-worn assistive devices developed for VIPs (Visually Impaired Persons). OrCam has its strengths, but it also has its limitations. One of those is that it does not have any magnification features. IrisVision is a head-worn device that uses magnification up to 12x along with other features. It’s for anyone with a visual impairment, not just for those with macular degeneration. It’s being used by people of all ages with all types of eye diseases.

Much more than just magnification

About 2 years ago, the founder and his team developed IrisVision (you’ll see it as Iris Vision, but the company doesn’t use a space between the words) as a tool for those with low vision. I’ve described it as wearing a CCTV on your face. A CCTV (Closed Circuit TV) uses a video camera to capture what it is pointed at. The user can alter that image by magnifying it, changing the color of the background, changing contrast. You’ll see this referred to as VR which means Virtual Reality because the reality of the image can be changed.

How this ‘magic’ happens is that when a person wears the device, the high-resolution video camera is recording everything in its field of view and projecting the same image onto each eye which means that a lot of the image is going onto the wearer’s healthy peripheral vision and also on the central vision that they have. With macular degeneration, there may be problems with the central part of the visual field, but the peripheral part is fine. It’s rare for all central vision to be gone.

As the wearer magnifies the image, any blind spots get smaller relative to the peripheral image that gets larger. OK, I’m going to admit to you that I don’t totally understand it! I read a blog post by Tom Perski, Vice President of Professional and Consumer Outreach at IrisVision, who has had a central visual impairment for 30 years. He writes that when he looks at his wife’s face without the IrisVision device, her features are blocked by his central blind spot. With IrisVision, he says that there is still a blind spot on her nose, but he can see the rest of her features clearly. Apparently, the device helps the wearer learn to look around any blind spot or spots which is easier because they are smaller.1 I’ll take his word for it.

All of the features are in a Samsung Galaxy phone that is inserted into a Samsung VR (Virtual Reality) headset. I’ve not seen one ‘in person,’ but it is supposed to be lightweight. There are straps to hold it in position on your head. Unlike the OrCam which is hardly noticeable, this device is hard to miss. As I said, you’re wearing a smartphone over your face! People notice things like that.

Not being able to drive is one of the worst consequences of having a visual impairment. You might be hoping that this device or one like it will allow you to drive again. I’m sorry, it won’t.

There can be some problems wearing it as a passenger in a moving car. They advise that you hold it in your lap until you need it to read a road sign, for example.

Because IrisVision covers all of both eyes, the wearer is not supposed to walk with it on because it blocks depth perception. We use our peripheral vision for things like walking safely using depth perception. The company website gives an example of being at a museum: you can wear the device to look at an exhibit, but then remove it while you walk to the next exhibit.

What can the wearer do with it?

The wearer has to be able to lift their hands to the device for the controls.

There is a learning curve. The company provides free, in-home training and support.

They’ve been adding new features regularly. Currently, with a wireless connection, the wearer can:

Unfortunately, IrisVision is not covered by Medicare or other insurance. None of this type of assistive device is. The company has a monthly payment plan (starting at $99/month as I write this).

The cost of the device is $2,950. It comes with a 30-day risk-free trial and ‘White glove’ at-home training and support. I’m not sure what the ‘white-glove’ part refers to.

They will ship the device worldwide for a fee (of course).

If you are a US veteran, you may be eligible to get IrisVision for free through the Department of Veterans Affairs. Eye specialists at your local VA hospital will help you try out IrisVision to see if it works for you.

The best reviews of assistive technology I’ve found are done by Sam Seavey. He writes and does videos for this site. He also has a YouTube channel called The Blind Life.

In my opinion, we need to be careful when watching videos and reading testimonials on the IrisVision site. As with any product, testimonials on sites that sell the product can be misleading. Also, keep in mind that if it sounds too good to be true, it may be.

The field of wearable technology is actually in its infancy. Companies like this have to charge so much money because they put a lot of research and development into their products. Plus, there’s not a high demand for them.

Catch 22: There’s not a high demand partly because they are so expensive! As with a lot of technology, I believe that the prices will come down as there are more and more entries in the field. And there ARE! More about that in another article.

If you have this device or you get a demonstration of it, let us know how it works for you.